The historic red brick building located at 1201 North Irwin in Hanford has been cloaked in mystery, legend and rumors through the years.

This iconic structure actually has a story rich in the historical beginnings of Hanford.  It was originally constructed as a hospital in 1912 by the Trewhitt-Shields Construction Company who also constructed a supporting sanitarium next door.

The hospital was started in 1912 by the sole owner and manager, Anna Katherine Doran, a nurse.  The hospital provided medical and surgical treatment for the sick and injured.  The next-door sanitarium, a medical facility for long-term illness from infectious disease, provided treatment for mainly tuberculosis patients. 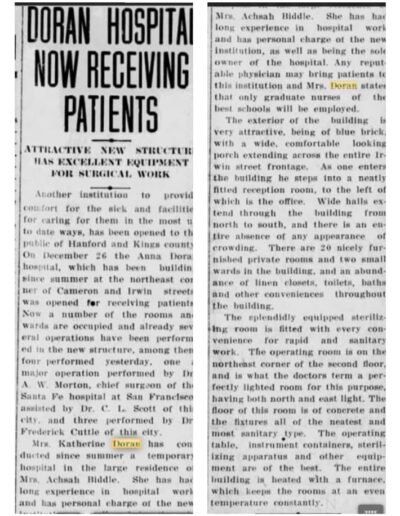 Article on Opening of Doran Hospital- 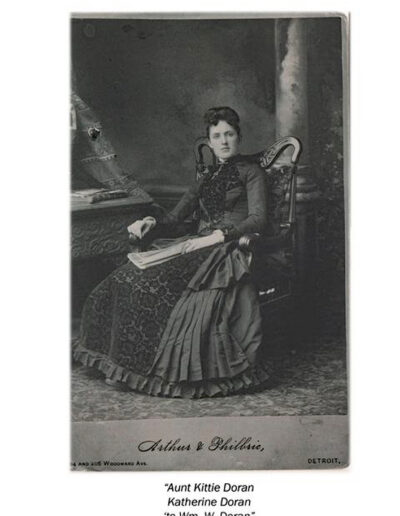 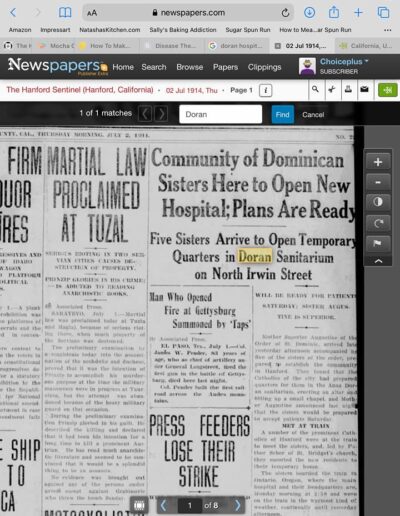 Article on sisters who arrived to take over the Doran Hospital- 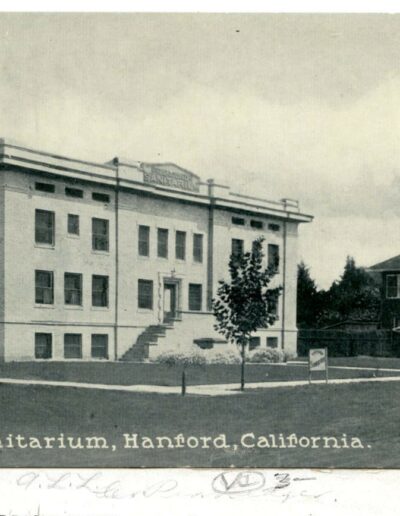 Upon the grand opening of the Anna Doran Hospital, a newspaper reporter touring the facility described it as spacious, well equipped and operated.  Anna told the reporter any reputable physician may bring their patients to her hospital and that she employed only graduate nurses from the best schools.  Upon entering the front door there was a reception room and wide halls extending north and south through the building.  There were 20 furnished private rooms, two small wards and abundance of linen closets, toilets and baths throughout the building.  Anna managed her hospital until 1914.

In 1914, the Anna Doran Hospital was rented and six Catholic nuns, Mother Superior Augustine and five other sisters of the Order of St. Dominic took over the hospital.  At that time, one of the rooms was converted to a chapel.  The nuns managed the hospital until 1915 when the Sacred Heart Hospital on Douty Street was opened.

Around 1915 the hospital was sold to Mr. and Mrs. George A. Richie who used the building as a residence.  Mr. Richie was a vineyard farmer and businessman.

In the early 1920’s the Richie’s sold the house to Spanish-American War veteran and California State Senator, Robert Roy Cunningham and his wife.  The Cunninghams raised their family in the house and the property was held in their estate until 1963.

In 1963, the property was sold to Dr. and Mrs. Harold Carr.  Dr. Carr was a dentist who operated his business in town.

This is only a brief glimpse of the early beginnings of the Anna Doran House.  Anna’s well-constructed legacy lives on, furnishing new owners with a piece of Hanford’s past.

Ready to Buy Or Sell?